Travelling around the contaminated zones near Fukushima – my mind flashes back to Ukraine: the empty schools, the broken glass, the abandoned shoes. They are all visual clichés in the photographic portrayal of Chernobyl, repeated ad-nausea by countless ‘disaster tourists’ who traipse through Chernobyl on day trips from Kyiv.  In Japan these visual tropes are once more offered for the lens, laid bare in the abandoned towns and villages near the Fukushima-Daiichi power plant. For someone who has spent much time in Chernobyl, Fukushima is unwelcomingly familiar.

“This is the field where the annual sports day used to be held…” explains one evacuee, over the sound of her Geiger counter“…all the parents would join in too” she remembered. She was here to visit her house in the ‘Red Zone’, which became highly contaminated with radiation after the huge earthquake and tsunami damaged the nuclear power plant in March 2011. She visits her house as much as possible, navigating the many police checkpoints with the necessary permission documents, and wearing a white contamination suit, mask, and gloves. At the end of the day we put our nuclear uniform in plastic bags. They’ll be put in large grey containers, with all the other uniforms that TEPCO workers and the mass of temporary workers (nuclear “gypsies”) have used over the years.

The school playing field is overgrown now. The tall grass slowly giving way to small samplings, that will one day become trees. It takes little imagination to hear the laughter of the kids who are now absent. On the eve of the World Cup final, here is a photograph from my mobile phone of the goal where football used to be played, just three and a half years ago: 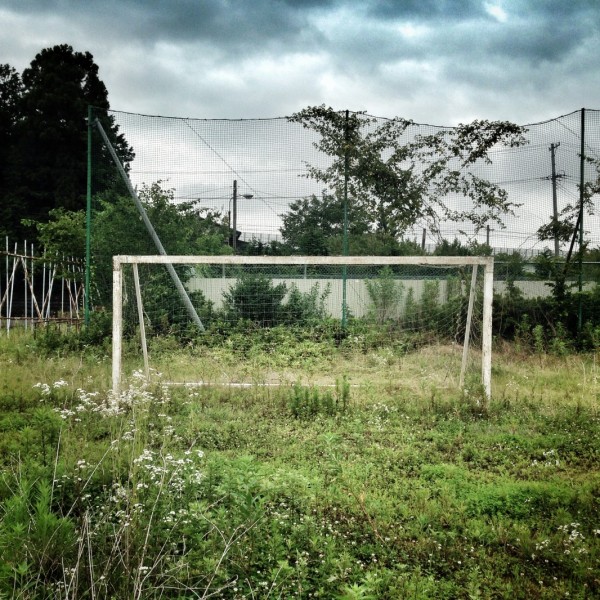